One of the things that irritates me a lot is manual work that should be automated by machines. Automation always trumps the error-prone human and, in my case, offered the opportunity to get to use some of SEGGER”s software I’d never used before to develop a useful tool.

What I wanted to do was automate gathering of on-target benchmark and selftest results for emCrypt, our extensive cryptography library. Customers are always asking how big things are, how much RAM they use, and how fast they run. I had always run the on-target emCrypt selftests and benchmarks by manually loading them onto hardware, running the code in Embedded Studio using RTT to output the results, and then copy-pasting the results into the emCrypt manual. And repeating the whole process for the next benchmark or selftest.

With so many selftest and benchmark applications, it became clear that the process was both cumbersome and error prone, not to mention boring, so I looked for a solution that I could use to automate the simple per-application process:

I built the solution from existing and new parts bound together in a small batch file.

This is the easy part. I had already developed and used a Python script that enables me to create Embedded Studio (and other) projects for our middleware. It happens to be very flexible, supporting a wide range of boards and target processors, and also ensures that the resulting projects are correctly configured with the minimum set of sources required. It creates configurations for optimized for size and optimized for speed using different compilers, debug versions using RTT, and instrumented versions using SystemView, like this: 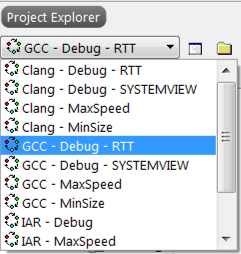 Managing your project with configurations to select compilation options, preprocessor defines, and application-dependent features makes development so much more productive. You can change configuration to an instrumented debug build in an instant when faced with a problem, or into a minimum size release build when unexpectedly requested for some metrics: click the dropdown, select the appropriate configuration, build and run. This is much simpler than editing your configuration settings in the plain Debug and Release configurations because it’s almost inevitable that a quick-and-dirty setting change in one of those configurations gets forgotten. Using Embedded Studio’s configuration inheritance capability can really streamline your development process!

Continuing on, I modified the script so I could easily choose the target processor and application I wanted to build as the existing script indiscriminantly created all projects for every board and every application it supported. And I chose to use the “Clang – MaxSpeed” configuration for benchmarking, but could equally have chosen some other configuration.

With the project created, time to build. Embedded Studio ships with a command-line application, emBuild, that loads a solution file and builds a particular project in one or more configurations: just what I need! No coding necessary, just a few lines of batch script to get the correct spell when building.

So this is where I ran into trouble. SEGGER has a set of utilities to program targets (e.g. J-Flash) and capture RTT (RTT Client and RTT Logger), but they are not easily automated and they are GUI-based rather than being command-line oriented, which I needed for my script. After canvassing the J-Link and Embedded Studio teams, we came to realize that no single utility would do what I needed and no utility is easily modified to do what I want.

So, what does an engineer do when presented with such a conundrum?  Simple: turn it into a programming task!

It seems obvious that SEGGER has everything I need from a quick inspection of our products: Ozone and Embedded Studio can both read ELF files, program targets, and capture RTT output.

The best option for J-Run was to take what we already have as proven components and do what a customer would do: write a utility that exactly fits the intended purpose.

I used only the SEGGER documentation and distributed libraries. That is, I didn’t use any internal knowledge and I didn’t contact the teams for assistance when writing J-Run.

Using ELFLib and the J-LinK SDK for this task was super easy.  A simple sketch of the application is:

It’s all very straightforward, a few hours of work to make the application look nice and add command line options for full flexibility.

In the end, the application is about 400 lines of code, with headers and comments, so is far from complex. As an executable it’s only 53K.

To demonstrate J-Run, here’s a simple application that times how long it takes, in processor cycles, to compute 10,000 single-precision sines:

Running this with J-Run from the command line is easy:

To reduce it to the bare minimum and just capture the application’s output, use the --silent switch: