In the previous post, Rolf described some of the progress that we have made on the brand-new SEGGER linker. In this post I examine the gnarly problems with the GNU linker and how they are easily solved by the SEGGER linker. A follow-up post will examine more of the linker’s capabilities.

The SEGGER linker is now integrated into Embedded Studio, our premier development environment, and has been tested for compatibility with Embedded Studio and Ozone, the J-Link debugger. However, this version is not yet released, it’s tentatively scheduled to happen sometime this month (Oct 2017), as we would like to use it internally first, to “get some hours on it”.

What’s wrong with the GNU linker?

The linker is the most unglamorous part of a development environment: it acts to stitch the program together from all the separately-compiled sources, and prepare it for execution. Nothing else. Simple, yes?

For host systems, such as Windows and Linux, linking is conceptually straightforward but has complexity baked-in for versioning, ABI compatibility, and shared libraries / DLLs, and so on.

Linking for bare-metal embedded systems swaps shared library baggage for the problem of fitting an application into a small microcontroller with a multitude of memory regions. If the end product has an extended life with regular updates then feature creep tends to make the firmware expand to fill all available space. When this happens, figuring out where you can trim the application and where your RAM is spent becomes important.

Using the GNU linker is just challenging: it’s too inflexible in its placement model and link-editor scripting language. When the rubber hits the road, having a capable linker rather than a make-do linker really can make all the difference to a project.

So, let’s dive right in and show what the SEGGER linker can do!

Flowing code around a configuration area

Some microcontrollers have their flash programmed with calibration values at the factory which should not be erased; some have flash security keys at the start of a flash page; and some applications just need to keep out of configuration areas that are programmed during device production and test.

Let’s take a typical example where some flash is defined as a configuration area. The first page of flash is typically used for exception vectors and can’t be used, so engineers invariably choose the final one or two pages to have the maximum contiguous linear address space for code and read-only data. Over time code grows and no longer fits, a bigger device is placed on the board, but legacy production and field updates means that the configuration area must remain in its original position: now plumb in the middle of the flash area. Fantastic. Welcome to legacy, I’m looking at you MSP430X…

Using GNU ld this presents a massive problem: two areas to populate with code and data and a big, greasy configuration section slap-bang between them. The only way is to partition your read-only data and functions into different non-default sections so that these sections can be gathered together as units and manually placed. In a synthetic link-editor script you would give directions something like this:

This directs the linker to place the “low” code and data into the first 64k minus 256 bytes (where the configuration area is), and to do the same for the “high” code and data.

Assistance from the IDE

Now, if you are fortunate and have a capable IDE, such as Embedded Studio, your IDE will help with this task by enabling you to set the code and data section names on a per-file, per-folder, or per-project basis. So you could organize the project into two logical folders (note: different from “disk folders”), place the sources you want in low memory in one folder, and the sources you want in high memory in the other: 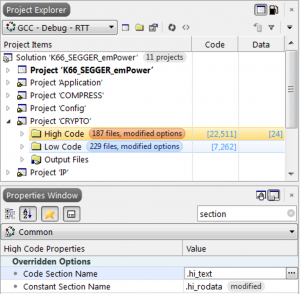 Moving code and data between the two areas is now just a matter of moving source files from one logical folder to another and letting the IDE sort it out.

Of course, the issue is that this doesn’t scale too well, you’ll be forever moving files around, finding that you need to artificially break up sources to get finer granularity over where functions and data are placed.

There must be a better way, because well, aren’t computers supposed to help us with automation and do all the heavy lifting?

Well, yes, the SEGGER linker will do this for you—automatically!  Here’s how:

That’s it. No direction on how to break things up into low and high areas. You declare a disjoint region of memory with one area having a chunk of 256 bytes removed and the second area following it.

Then you place your code and data into that flash area and let the linker do the section placement for you. Job done, move on.

Placing functions or data at a fixed address

For whatever reason, customers always want to do this. This problem is related to the “keep away” problem described above, but is more complicated as something needs to be placed at a fixed address and worked around.

Let’s take the example of placing a function at address 0x8000 inside a 64k flash region. How would you do this with the GNU linker?  Well, to cut to the chase, you can’t do it automatically because (in general) you don’t know the size of the function if it’s compiled by the C compiler, and its size will invariable change depending upon compilation options used.

But let’s take a shot at it. If you have better suggestions, please let me know.

In general a much-reduced GNU linker script for a small Cortex-M device looks like this:

Returning to our problem, the only way to guarantee that a function is placed at an address is to compile it into its own named section…

This will work with a small program: the code of the application will fit into memory all below 0x8000 and the code and data all fit. However, as soon as the code grows above approximately 32k, the GNU linker will complain that it can’t place .myfunc at address 0x8000 because it’s already occupied by code in the .text section. And we’re back to manually segregating code around 0x8000…

By now you expect that SEGGER’s solution will simply work. It’s OK but it’s not really optimal, and we’ll return to this.

First, we dispense with the attribute on the function and make sure it has external linkage so the linker can see it:

Then the placement is made:

The instructions here should be fairly clear:

Notice that the linker takes care of placing code into memory and working around absolutely placed items: you don’t need to “make a hole” for the function to fit into, the linker knows how big the function is, where it’s placed, and the specification of what to place where, and it simply works on the problem and solves it for you.

Software engineers work with source code more than they do with linker scripts. The above solution works, but it has some minor drawbacks for some people:

…and not pollute the linker script:

The linker automatically interprets section names that end with the particular sequence __at_hex as an absolute placement to be made. Simple and effective.